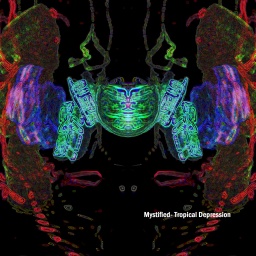 This is the fourth release (the third in bump side) by Mystified. Hypnotic beats came again.

The key words for Tropical Depression are "drone" and "techno". Netlabel buccaneer Mystified has crafted a mid-length release comprised of punchy, catchy sample patterns laid over oscillating drones. Pieces are narcotic but not without pop value.
The basic theme explored is "trouble in paradise" - even in it's most relaxed and decadent moments, mankind has its share of issues - Eden had its snake, Hawaii its hurricanes, Florida its oil spill residue. To put this another way - the pieces on this release can be blissful but also dark, and yet this does not diminish their playfulness.
The fifth track is a short field recording of a supermarket, given a special audio treatment by Mystified, emphasizing once again a troubled consumerist paradise.
A video is included for the first track, "Piece Of Cake". The video features clips from an old film about making soundtracks and various audio experiments, rendered over a shifting bed of colorful images.
The main cover image is by photographer Jake Eldridge.

Reviewer: Thierry Massard - favoritefavoritefavoritefavoritefavorite - September 1, 2010
Subject: danger in paradize ...
an excellency (surprise) ? this tropical depression of Mystified is curiously a longtime (unspoken) awaited release - an evidence ! the balance between drama with paradise fragrances, insidious soundscapes (of course) and the reading distance between elements and subjectivity - inspired !